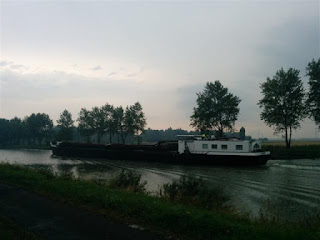 Well, we're on the road again - but only just.

This whole summer's plans have been wiped out thanks to some kind people that sold us our dream house, but then sold it again to some other people in a more lucrative deal a couple of weeks before we were due to complete.

We had to shelve our trip to Belarus and have decided to at least knock off a couple of fairly local destinations that we've talked about on and off for a while: The Camargue and Mont Ventoux.

And so, we're in France. We arrived earlier today in Calais to torrential thunderstorms. The whole town looked utterly miserable and was thronged at every junction with National Police doing their bit to pointlessly shuffle the enormous economic migrant population from one part of Calais to another: and back again.

We just got out as quickly as we could and concentrated on our very western problems such as where the cheapest diesel was -  turned out to be a dog-end automated supermarket 24/24 at €1.09/l.

Leaving Calais we drove under truly biblically black skies and through sheets of almost impenetrable water to one of our known hidey-holes (coordinates) alongside a well-used-by-freight-barges canal.

It's been a pleasant evening with a mixture of barges and wildlife to pass the time. Once the rain stopped the conditions turned really muggy with mist rising weirdly off the surrounding landscape as far as the eye could see. Best wildlife has been flock of about 30 common sandpipers peeping incessantly as they whizz back and forth across the canal for reasons only really understood by sandpipers.