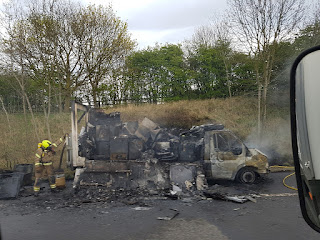 Blogging at 21:40 on Monday 11th April from intended overnighting spot N 51.58216°, W 01.29594° / http://maps.google.com/maps?q=loc:51.58216%2C-01.29594
We'd planned to have a fairly detailed look at Brittany over last Christmas but were scuppered at the very last minute by Monsieur Macron, who decided to impose impossibly heavy and totally arbitrary restrictions on travellers from the UK due to concerns around C-19: or possibly as a sop to the right-leaning chunk of the French electorate that he's currently trying to win over in order to keep his job.
Anyway, whilst he's currently distracted beefing up his image by being photographed pointlessly ringing the Kremlin, we've decided to sneak over and continue the Brittany mission.
We're due to sail from Portsmouth tomorrow afternoon so have today pootled gently Portsmouthwards as far as the location shown.
It's not a particularly splendid spot to spend an evening as it's rather too close to the A34, but the tiny copse we're hidden in has at least been good for blackbirds and robins in full song and in the adjoining arable there's been at least a dozen corn buntings flitting about, perching on fence posts and singing. It's good to see this beleaguered-by-unsustainable-farming species in decent numbers.
Lowlight of the day was being five seconds too late on the M1 southbound and winding up getting stopped for half an hour in a full road closure due to a van on fire. It really was a raging inferno. We were literally upon the scene at the height of the fire but could have just about snuck past it if not for the traffic patrol officers attending deeming it was all looking a bit too risky and pulling their car across all live lanes. In fairness it was the right call, the flames, smoke and fumes were horrific. It got so bad that they even closed the northbound lanes, too. I've no idea what had happened but the driver was OK: the van less so.
Sent from my mobile device
Posted on: Tuesday, April 12, 2022