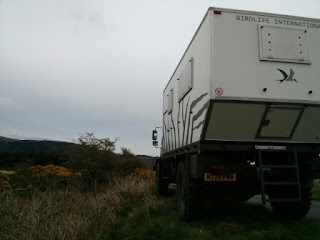 
Our vaguely planned Easter jaunt to the Netherlands has seen us, for no particularly compelling reason, heading west instead.

We didn't cover as much of Ireland as we'd hoped a couple of years ago and though I went online with the intention of booking a Harwich-Hook of Holland ferry - I came offline having booked Cairnryan-Larne instead.

And so, Ireland-bound we are: to be sure.

We have no real plan but to bumble amongst nature reserves in a roughly anti-clockwise direction around the coastline as far down the west coast as the Connemara, the place we managed to reach from the South in 2015.

And so, with the intention of making the ferry at midday tomorrow, we find ourselves in Dumfries and Galloway at the Mersehead RSPB Reserve (pic). This place is awesome, we've stayed here before and it's a place the BBC have visited on a few occasions filming their Spring / Autumn Watch shows.

It's fantastic for migrating birds and the general area is known to host the entire breeding population of Svarlbard's barnacle geese over winter. There are thousands of them here, feeding furiously and preparing for the big haul north.

As well as departing birds there are also new arrivals. Sand martins are everywhere and I've seen and heard a couple of willow warblers - my first of the year. There are red kites about, too. I hadn't realised they'd done so well in southern Scotland post-persecution.

All's good then, apart from Emma. She started with a sore throat yesterday morning and is now in full cold-type-symptoms mode. I genuinely feel for her but, lest I forget, she's doing a bang-up job of constantly reminding me that she's not very well.