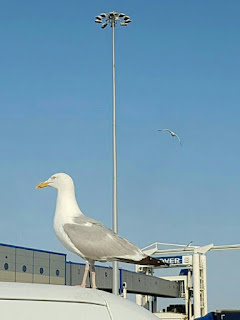 Well, it's been an arduous start.

The M25 at Dartford was at a standstill, this ate up most of the one hour contingency I'd built in for reaching Dover. It was rough, too  the searing temperature really didn't help; with the truck being stood and the heatsoak from the engine combining to make something of a furnace.

On the back foot time-wise, we got to a random junction about 5 miles from the port and as I accelerated away, the entire exhaust system fell out of the bottom of the truck and deposited itself unceremoniously on the road.

Now, this is not the first time the exhaust system has broken but it's never before broken all of the mounting brackets at once and fallen clean off the truck.

Fair to say the thing was pretty hot, very heavy and took some recovering from a sweltering, busy A2.

Naturally, first call was to the ferry company to explain we wouldn't be making check-in. Next, we nursed the truck to the first garage in the satnav's database and as luck would have it we couldn't have hoped for a better setup. Online MBT turned out to be our saviour; a big transport and logistics concern with its own workshop and spares department (coordinates).

They were just brilliant. Super-friendly and welcoming, they dropped everything to help us. Two hours later, they'd located a flange bracket (the original had been ripped in two), welded both the gearbox and bellhousing mounts up, and rehung the entire system. Top job.

It could have been so much worse, if we'd have lost the system at speed it would almost certainly have done loads more damage and who knows what might have happened in fast traffic.

The only real bummer was whilst transporting the hot, broken system the couple of miles necessary in the back, it slid around in the towels we'd wrapped it in and damaged one of the furniture panels.

On my return this will have to be a fix, and, having broken various parts of the exhaust on numerous occasions now (along with many other T244 owners), it's clearly time for a full system rethink...

Anyway, for now we're back on track and moving under the watchful eye of the local herring gulls.