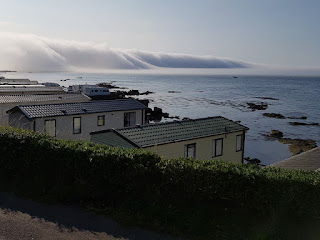 Blogging at 16:00 on Monday 23rd August from N 55.29277°, W 06.19541° / http://maps.google.com/maps?q=loc:55.29277%2C-06.19541
We're just departing Rathlin Island (coordinates) and it's been even more interesting than we'd hoped for. What came as the biggest surprise was the small-but-perfectly-formed interior. The heaths and freshwater bodies support tons of native flora, insect and bird life, and it was splendid to find really good numbers and diversity of wildfowl and passerines. There was, of course, all the coastal and maritime stuff, too. More noteable birds were twite and a peregrine.
Emma particular enjoyed some really close-up seal interactions. The (mainly) common seals on the island are mostly indifferent to humans and it's possible to be close enough to hear hauled-out animals grunting, muling and even breathing without (apparently) upsetting them. Emma kept to a distance of about 20 metres but we did see loads of other Rathlin Island visitors getting much closer than this.
Ahh, the visitors. It's fair to say that each and every day see considerably more  visitors than residents (who number about 150) and that the ones we encountered, at least, came in all shapes and sizes from serious naturalists to extended bucket-and-spade family groups.
Of the few of the island's natives we encountered, none of them interacted with us in any way and I have total sympathy; I wouldn't have interacted with us either.
Actually, that's not entirely true. We did touch base with the island's battered tourist minibus driver, who gave us a hard time on our bikes on two separate occasions. It's entirely probable that up to 149 of the island's residents are not ass-holes.
Once again the intrinsic tensions of an economy heavily dependent upon tourism in a place ill-able to sustain tourism writ large.
Definitely worth some kudos is that the  Rathlin Islanders took it upon themselves at a very early stage of the pandemic to ignore the clown-shoes idiotic buffoonery of most of our political elite and deal with the threat in a way that didn't mean incompetently making a bad situation much worse. They stayed entirely C-19 free until the vaccination program was complete.
One other observation of the island culture - and one it shares with many other similar islands we've visited - is that many of the resident cars are proper wreckers. Hardly any have a full suite of straight panels and it seems things like exhausts, registration plates, bumpers and even things like doors and tyres with tread are entirely optional. It wasn't quite Bere Island (sub-)standards, but it wasn't far short.
We're heading back on the impressively fast ferry now and hoping the menacing sea misty-fog monster (pic) that we've seen a lot over the last day or so hasn't eaten the truck.
Sent from my mobile device
Posted on: Tuesday, August 24, 2021