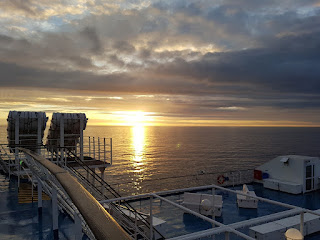 Blogging at 19:00 on Tuesday 12th April from N 49.89213°, W 00.51048° / http://maps.google.com/maps?q=loc:49.89213%2C-00.51048
Last night's camp was indeed a bit too near the A34 for comfort and we probably won't use it again unless the wind's out of the west. That said the area was again thronged with birds come the morning with even more corn buntings, plus loads of other traditional farmland birds like skylarks, yellowhammers and linnets showing well.
We left pretty early but only shuffled a few miles south before parking up and having an hour's wander on and around The Ridgeway long-distance national trail. The chalk-based habitats and general vistas around and about were splendid and indeed are supposed to be home to such endangered species as the chalkhill blue butterfly. It's a bit early in the year for such things but we did hear our first whitethroat of this season, plus we heard and later saw the first blackcaps of the year, too  I'm guessing the flora in the area in another month or so will be pretty awesome and we may well return for a look. It's a cracking bit of England.
Early afternoon saw us arrive at Portsmouth to the news our ferry had been delayed. This was slightly frustrating to say the least as this ferry was one we'd had to fight to get a place on following our first choice from Poole to Cherbourg being outright cancelled due to 'technical' problems with the vessel. Suffice to say Brittany Ferries made a stressful nightmare of managing the cancelled service's re-booking process and were it not for the fact their great UK-France-passages rival P&O had only a week or so before effectively self-destructed through staggeringly incompetent 'management', we may well have baled on Brittany Ferries' farcical 'service' altogether. It's as if - post C-19 - the great rivals have embarked on a determined race to the bottom. It's a close race.
The ferry delay will see us disembarking (assuming no further ineptitude is visited upon us between now and then) well after dark. I'm not sure where we'll end up tonight, but I really don't want to be threading the truck down too many tiny French roads late into the night...
Sent from my mobile device
Posted on: Tuesday, April 12, 2022