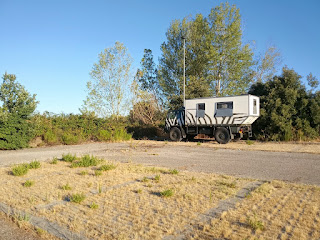 Blogging at 22:00 on Saturday 30th July from intended overnighting spot N 43.12746°, E 12.02664° / http://maps.google.com/maps?q=loc:43.12746%2C12.02664
Justin bloody Bieber laid waste our plans for a non-frenetic parkrun experience, and also to our escape from Lucca.
In spite of yesterday's recce, we could only drive so far into the city this morning before we encountered total road blocks in exactly the part of Lucca we needed to reach. It turns out that Canada's boy without a boy-band is gigging in the city tomorrow evening and the entire area 'needed' to be closed down for setting up the stage and security purposes.
A frenetic 15 minutes or so followed as just about everywhere in Lucca is heavily restricted in terms of access and parking; with omnipresent and very firm warnings of towing-away type consequences.
Eventually we found a car park where larger vehicles were allowed and paid a franky extortionate fee to abandon the truck; from where we were then forced to run far too quickly for the two kilometers or so to the start of the event. Thankfully, we made it and even more thankfully the parkrun was still on: in spite of Justin bloody Bieber trying to spoil everyone's fun.
And so: we did the Lucca parkrun! It's an absolutely excellent event as it's basically a circuit of the historic city walls. The elevated views these afford are splendid and it really does feel like running atop a testament to human history and endeavour. It was also tree-lined, which helped in some small way to mitigate the 33 day C through which the participants toiled. Great stuff!
As above, Justin bloody Bieber also saw us snagged horribly trying to leave the city but we eventually prevailed and started to cover some ground towards our next point of interest. The afternoon's drive saw us crashing and banging in a roughly southeastern direction. Crashing and banging because the roads, and for that matter a great deal of the civil engineering are, in our experience so far, pretty rubbish: especially given that this is supposed to be a developed nation and a member state of the G7.
In a more general observation, the country is also pretty skanky, restless and noisy in exactly the same way that its land-border neighbours are not. There is litter and signs if neglect everywhere. Traffic is still busy well into the night and, wherever you are, there are permanently barking dogs and / or the noise of the raucous caperings of people spilling out... from everywhere... almost constantly.
On the flip side, many of the natives have been very friendly and we've had more smiles, thumbs up and wildly-gesticulated shows-of-truck-approval than most other places we've been.
Tonight's intended overnighting spot is again utterly unspectacular, but at least is pretty well hidden: out of sight, out of mind and all that. It's fair to say that really good overnighting spots have so far eluded us in Italy. It was the same the last time we were here. Bits of truck-sized land with good vistas that are not next to a heavily trafficked road are just not a common feature. Neither is track-access to 'wilderness'.
In spite of it, we're still doing OK and tonight's bit of out-of-sight abandoned and dutifully littered tarmac (pic) has thrown up some excellent hoopoe sightings. Other birds casually encountered during the drive have been white stork, fan-tailed warbler and two peregrines.