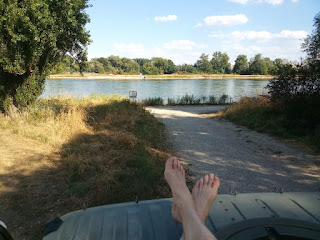 Blogging at 21:00 on Monday 22nd August from intended overnighting spot N 49.04798°, E 08.30558° / http://maps.google.com/maps?q=loc:49.04798%2C08.30558
After a restful night and a possible last sighting of bee-eaters for this trip during this morning's breakfast we again faced the westbound A8 and again fell foul of roadworks, traffic jams and the very opposite of zip-merging.
Thankfully we were able to have at least some respite in a nice woodland lunch stop and by mid afternoon we'd arrived at our intended overnighting spot by the Rhine. We've used this spot a couple of times before and it's proved reliable, even though it's somewhat improbable given the proximity to heavy industry. There are a few bits and bobs of birdlife about but one of the main attractions of the spot is just lazily watching the river (pic) and it's considerable boat traffic. The river flows fast here and it's quite something to see enormous barges having to deploy huge amounts of engine power just to punch the flow.
As always, many of the barges are from other counties and seeing them, especially the ones with the crews' cars aboard, always evokes a sense of an inscrutable world of adventure. It looks like it has the potential to be a thoroughly reputable and rewarding way to earn a crust. I strongly suspect that the boats' crews are looking back at us and the truck from their bridges and thinking entirely the opposite to all of the above.
Even though the focus has been the river, there's also been a fair bit of natural history interest with particularly good sightings of a couple of kingfishers, a coypu, two roe deer fawns and brown hare.
Altogether, it's been a mainly lazy day that would have been a fully lazy day had Emma not decided it would be a good idea to go for a run up and down the river bank in the 30 deg C afternoon temperatures.