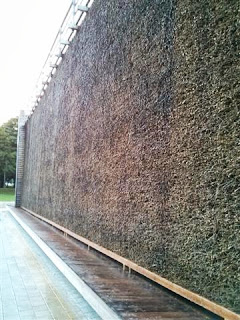 Last night's camp was a good one and the moon even obliged by rising large and orange through the trees by the swimming / fishing pond. Picture postcard stuff.

We burned off the last of our Czech cash by visiting an Aldi and then topping up with fuel. Czech Aldis are incredibly cheap. Emma bought about 12 cans of lager and groceries, I bought two 70cl bottles of rum and groceries, and between us we managed to spend no more than about £15. Bonkers.

The day has been one of honking over Germany, if 46-50mph can ever be counted as honking, that is. We've made decent progress and are now closer to France than Czech Republic - more of the same scheduled for tomorrow. Once again the autobahns demonstrate how just a 10% increase in overall truck gearing would be a great improvement.

Currently on the fringes of a small Town on a bit of rough ground next to a large recreation area. It's all very germanically laid out and maintained, and very arty. There is one really noteworthy feature.

There is a huge framework covering what looks like some old, tall, cut-back conifers that are long since dead. Water is pumped to the top and then trickles / drips down the whole structure in a peculiarly mesmerising way. There are seats and loungers set up for people to watch it and on our arrival every one was full with people simply staring at the thing. The photo was taken late after the sun had dropped, but in sunlight it is stunning.

There is just too much to see in the world. This is just a random town on a random day.

To break up tomorrow's drive, If it works out, I'm going to try to fit a visit to Ormocar in, it's on the route and holds much fascination for me. I have a feeling it will be a long day for Emma.