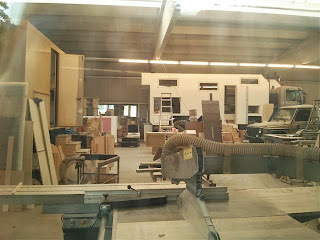 Some things are certain in life, one of which is that France will never disappoint on terms of rain. In fairness it rained in Germany a bit as we neared Luxembourg (which we dropped into to buy cheap diesel (about £1.10/litre)), once in France though we had a huge and ugly electrical storm with serious car-damaging hail. The truck shrugged it off but I'm glad we didn't have a common-for-motorhomes aluminium roof.

We didn't have to come here, but France is a known quantity for a good night's sleep, and though we are in a thoroughly ordinary place hunkered down behind an anonymous industrial park, it is quiet and hidden. Just the job for a late arrival / early departure style stopover. Even from here though we are watching bats circling the truck and making us feel anthropocentrically inadequate.

Highlight of this driving-orientated day was making it to the Ormocar factory and lollygagging at the truly amazing overlanders being built there. In the grainy picture is an Actros 6x6 (probably circa €500,000), a Unimog with cabin in place and a G Wagon awaiting goodness knows what. Out back were about 6 brand new MAN, Unimog, and MB 4x4 base vehicles as well as another 4 or 5 fully converted trucks back for repair etc. Even Emma was surprisingly impressed. What, with that and the Soos trails, I'm beginning to believe I really can show a girl a good time.

Ormocar's trucks made ours look crap, but then they know what they are doing, are massively resourced, and don't build them on their mam's drive.

The area round their factory is also top notch. It's only a few miles north of the Alsace region we love, and has the same primary woodland / sandstone outcrop topography. Whilst viewing the Ormocar trucks a raven was quartering and cronking at me. Quoth the raven "buy an Ormocar".