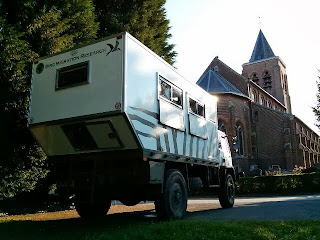 After a day of trogging through a very grey Belgium we popped back into France to be faced with an immediate change in weather and a very pleasant sunny evening parked by the church in Ste Marie Cappel. This is an archetypal small French village that we've stayed in a few times now. Awesome civic pride and very laid back. We were here less than an hour before being approached by a couple of middle-aged residents out on their bikes who were super-interested in the truck. They had a look round and gave us a formal welcome to their village. We've also had a friendly smile and nod from the bloke whose house we are parked near. A couple of teenagers are playing with a football about 50 metres away but are being utterly respectful of all who pass. Kids are passing by, staring agog, smiling, and giving us a friendly 'bonjour'.

As the crow flies we are fewer than 50 miles from the UK; as the crow doesn't fly we couldn't be further from home. Bleeding-heart liberalism and the subsequent culture of selfish disregard for personal accountability has killed our country.

Managed to fit a run in this evening as well as the general pontification, more than I could have hoped for given the amount of driving over the past 3 days.