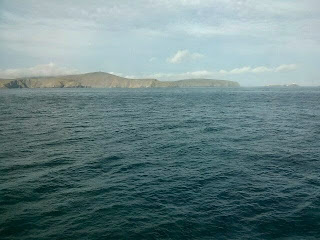 It took about an hour of wandering round to suss out the ship, such is its size and complexity. It's very well equipped, has everything a dedicated cruise ship would, and is no doubt highly evolved in extracting cash from its temporary prisoners. The prisoners are diverse with many backpackers mixing it with the clearly very well heeled, and all manner of types in between.

Many of the holidaymakers on board seem to be heading for vehicle based tours of Iceland, most of which seem to revolve around utilising accommodation en-route rather than being self contained. There are more push bike tourists than expected on board too; most have beards. The days of relentless wind and rain slogging through Denmark with jaws set will no doubt have prepared them well for their upcoming purgatory. I know, I've previously been that purgat.

We've made use of the ship's gym and yesterday afternoon had a good session on bike trainers and treadmills. We'll probably have another go today (but see later re ship torpor).

Yesterday evening things got a bit rock-and-rollie with roughening seas seeing us turn in early in an effort to keep as still as possible and retain our pot noodles. At least if we'd failed it would only look like we'd been clumsy and spilled them - ideal ship food in so many ways.

This morning things were much calmer and we treated ourselves to an all-you-can-eat buffet which I confess I viewed as a challenge. At about £12.50 I'd say it ended up as a draw.

A splendid breakfast bonus was - as per this entry's location - that we were bang on time to start the first of our 7 or 8 courses as we steamed by the northern coast of Shetland. It was nice if ironic as  by that point we'd been travelling away from home and towards our destination for 5 days and going on 2000 miles and were still, as can be seen from the pic,  under a mile from the UK coast.

The bird life just off Shetland was very busy, with great skua and puffin adding to the by now ubiquitous fulmar, gannet, and various gulls.

Though there's plenty to do on board we are both suffering ship torpor. Longer sea journeys always seem to induce this, even the smallest task or leisure pursuit takes a great deal of building up to and coming down from. Fair to say much laying about is going on.