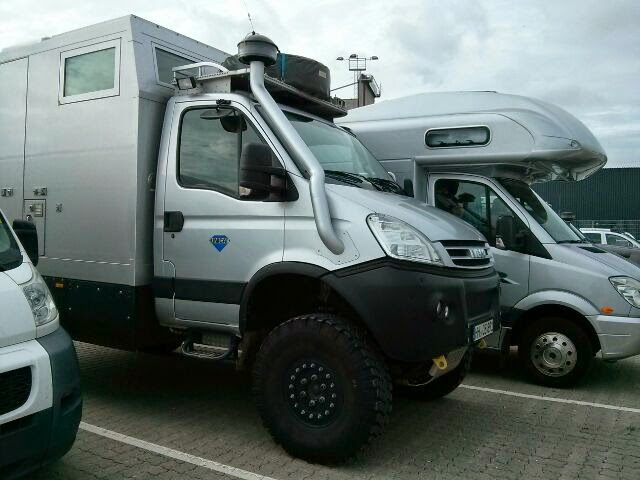 Last night's camp proved peaceful and after a lazy breakfast we made the short drive to Hirtshals where we went through a pretty straight forward check-in process (if you gloss over the fact I picked the wrong check-in lane and had to squeeze through a car-sized tunnel with mirrors folded in - we had about 40mm each side to play with).

As the Iceland-bound traffic mustered quay side it was quite some international affair. Many of the vehicles were full-on overlanders from motorcycles, through Land Rover/ Land Cruiser types, right up to trucks bigger than ours. My favourite was an Iveco Daily 4x4 based UniCat. It exuded quality and was, to my current way of thinking, the ideal compromise size and chassis wise for a genuinely go-anywhere live aboard.

The nationalities were incredibly diverse. Here are the ones I can remember: German, Swedish, Norwegian, Slovakian, French, Dutch, Italian, Faroese, Icelandic, Swiss, Austrian, Belgian, Russian and Polish. There was also one other Brit family in a Danbury (Brazilian import) type 2 VW bus.

It's one of the few places where we've been in the truck and have been plain ordinary.

I talked for a while with a Dutch bloke in a converted Land Cruiser on his 7th trip to Iceland. I was incredibly impressed with his English and knowledge. Not only did he know the English name for my current obsessed-with-seeing bird: storm petrel, but also knew of their autecology and of the colonies that occupy the islands off the coast of Wales.

As I type the boat's arriving - it's blinking huge.