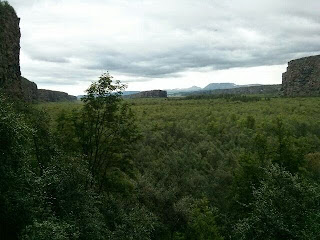 From Dettifoss we pottered a little further north to the Ásbyrgi area (pictured), which is a predominantly wooded (very rare in Iceland) area that is surrounded by its signature feature of massive horseshoe shaped cliffs. Again, it's quite something to behold on the landscape level but looking closer, it's also extremely rich in species. I've never before, for example, seen tea-leaved or woolly willow but this woodland boasts both amongst its vast species list.

On a stunningly beautiful pond right in the heart of it we saw red-breasted merganser and ruddy duck. I haven't seen ruddy duck in any numbers since the good old RSPB embarked on a crusade to exterminate the species in the UK. Slow hand clap to our captains of 'conservation'. The Icelandic model revolves far more around preservation, I don't know why the various natural history organisations at home are so blinkered, and so very heavy-handedly far behind on this one. We're in a bad enough pickle with idiots like those at the helm of the NFU wantonly legitimising the destruction of our natural history without the so called conservation organisations doing little more than creating whimsical gardens on a grand scale.

From Ásbyrgi we put in another short drive to the coast where we've decided to stay for tonight (coordinates shown) overlooking the open sea/bay of Öxarfjörður.

The bird life here is bonkers. There are thousands of guillemots plying back and forth, loads of wader and gull species, many of which - to this point in Iceland - we hadn't seen. These include: whimbrel, black tailed godwit, redshank, and Iceland gull. Of the non gulls and waders, other new-to-us-in-Iceland species here include wheatear, meadow pipit, black guillemot, eider, and both great and Arctic skua. The latter particularly are beautifully graceful pirates, bullying the Arctic terns and stealing their fish-catch at every opportunity. It's literally impossible to look out of the truck and not see dozens if not hundreds of birds.

We've used the short day's drive to catch up on a few cleaning and maintenance jobs, including sorting out a bit of a bent cab step scenario that occurred thanks to a moment of complacency and some rocky outcrops that had probably lain undisturbed for about 4,000,000 years until yesterday. I genuinely hope they weren't geologically significant.

Actually, a theme has developed, the lower of the two cab steps is vulnerable and it's the third time now over the course of many countries, 12,000 miles and many ridiculously tight gaps that they've proved to be something of a liability. It's the only bit of the truck that's unnecessarily 'jutty' in real-world motorhoming. I'm going to think about some suspended or hinged lower steps on our return to the UK: or learn to drive.