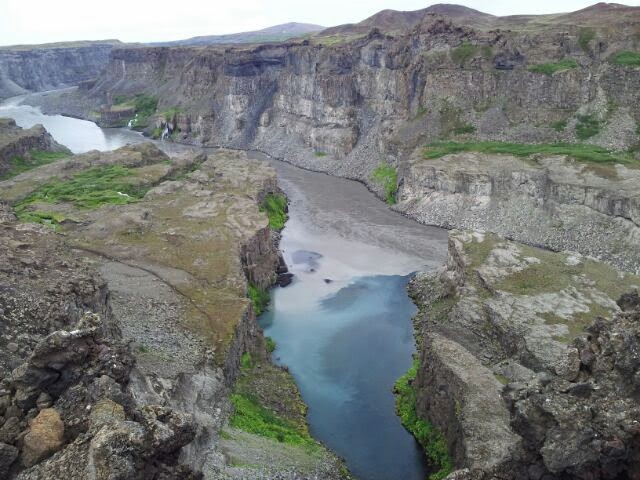 The wind got up last night and meant I had to get out of bed and move the truck round to face it head on in order to prevent being rocked about unnervingly violently. A positive side of this was witnessing the light. At 2.30am it was light enough to see everything that it had been possible to see during the previous 'day'. The sun was below the horizon, but only just, and about to rise having literally just barely set. It all added to the overwhelming sense of other-worldliness. It just isn't getting dark here at all at the moment.

After breakfast we spent the day heading out of the F road system but en-route took our time and witnessed yet more bizarre and captivating landscapes like very recent solidified lava flows, giant rocks pushed up and out of the ground by incredible pressure and lying there all split and contorted having been so rudely interrupted, and a really fantastic area of verdant vegetation surrounding a fresh water flash. This area was teeming with birds that included many of the species we've already seen plus ringed plover and an odd looking duck that I couldn't get the bins on properly.

For anyone interested, the route we took on this foray into the interior was: F923, F910, F894 and F88. It took in Europe's largest desert and though it was a longer route to Askja than is strictly necessary, it was supremely rewarding. Going in on - and returning via - the F88 alone, though very worthwhile, would miss a lot of awesome landscape and wildlife.

We're currently, as per the location coordinates, right close to Dettifoss, an incredibly powerful waterfall that's at the heart of a long and spectacular system of gorges. The pic doesn't begin to do the area justice.

We both managed a run today over some waymarked trails around the gorge system, running amongst solidified lava and glacial moraine with thunderous waterfalls close by is not the chore that run-training can sometimes be.