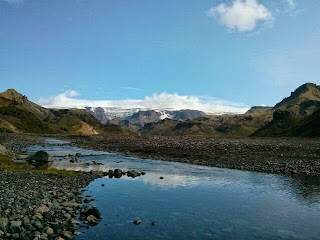 No massive geological phenomena occurred overnight at our camp. In fact nothing occurred, it was eerily silent.

We're just about to have lunch at the coordinates shown in the þórsmörk valley. It's a very wide valley and is flanked on three sides by glaciers. It's incredibly pretty and is only accessible by a very rough F road. One of the last fords on this road is pretty dodgy. It was in the news last week that a bus driver got stuck in the fast flowing, deep and rocky river which necessitated a passenger rescue effort.

Fair to say it's the toughest ford we've done so far, not one for the faint-hearted, we were in it up to the doors for a couple of seconds (it felt like minutes). Quite a few vehicles turned up at it but only a handful crossed. At the campsite near our lunch stop is a tractor with a huge thick tow rope at the ready: we are told he's kept busy. Presumably it was the same guy that rescued the tourists mentioned above.

The reward for getting to the head of the valley is worthwhile. The scenery is stunning with rich green vegetation contrasting superbly against the icy blue glaciers and the wide grey ash-dominated flood plains. There are weird rock formations and caves all over the place. If it were a painting, it wouldn't look real.