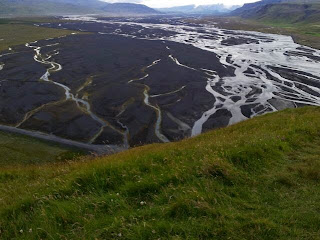 After Geysir we just covered ground for a couple of hours. It was a case of getting out of the flattish, relatively densely populated, and heavily agricultural south west of the country and heading east towards our next intended stop-off.

For the first time on this trip we struggled for an overnighting spot. A likely-from-the-map area turned out to be a closely packed network of farms with not even the slightest hint of a quiet public-access spot. It cost us a detour of about 45 minutes and a few litres of diesel but on the plus side we had a really good view of a female merlin perched on a post right at the side of the truck.

After covering a bit more ground we ended up at the coordinates shown which is very pretty, quiet, and has (distant) views of the host of the infamous ash-cloud eruption, Eyjafjallajökull (just visible at top of pic). The huge valley in the foreground is thick in deposited ash, presumably from the 2010 event.

As an added bonus, in the other direction, we can see the Westman Islands; the last of which appeared as if by magic from the sea only 50 or so years ago.

Who knows what we'll find tomorrow morning. Not only could anything happen, it actually does here.