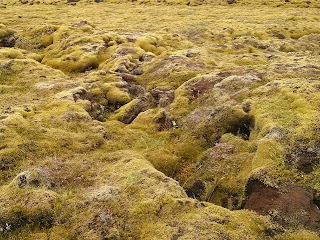 We've been whistle-stop tourists today as time is now running out in a big way. We have to be at the port tomorrow night to be ready to sail first thing Thursday morning but are still hundreds of kilometres and a couple of 'must-sees' short.

Today then, whilst travelling east on Road 1 we've taken in Seljalandsfoss and Skógafoss waterfalls, sea-rock formations at Dyrhólaey, the bizarre moss covered rock fields of Myrdalssandur, and made another attempt at getting Emma actually onto a glacier.

Both waterfalls are awesome but quite heavily touristed, I personally preferred Seljalandsfoss as it's possible to walk right round the back of it thanks to an undercut in the cliff it falls off. Skógafoss is quite a bit more powerful and definitely worth a look; actually it's hard to ignore, it's right on the roadside.

The sea-rock formations are pretty cool but the best bit of this area is the adjacent estuary. It's a specially protected area for its birdlife and boasts an impressive species list.

The moss covered rock fields are a real spectacle. They go on for miles and miles and are unlike any other landscape  I've seen. A closer look reveals that quite a few vascular plants manage to live amongst the community but a thick carpet of moss three dimensionally smothers virtually everything in the area. Not only does it look weird but it has a strange effect on acoustics too, it really deadens sound. In some parts the moss is forming raised bog, in others it just mercilessly suffocates the underlying lava and rocks. For hundreds of square kilometres, no surface is safe. As with most of the stuff we're seeing, the pic doesn't do this landscape justice.

We're overnighting at the coordinates shown and are only a few kilometres away from a tongue of the vast Vatnajökull glacier (the largest in Europe). Emma really wants to actually touch a glacier, or better still stand on one, before we leave. Suffice to say that a valiant effort involving a mountain bike and a trek over some soft black sand dunes was again thwarted, and again by a river. This time it was a real no-go though. It was about 200 metres wide, in a deep valley bottom, silty grey from the glacier, and absolutely raging. Epic fail number two...