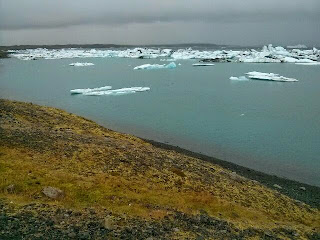 The sheer splendour of Jökulsárlón has to be seen to be believed. The colours within some of the chunks of glacial icebergs are incredible; with surely some of the cleanest, brightest, electric blues possible in nature.

In spite of the lagoon being right next to Road 1 - and there being quite a few tourists about - the wildlife was prolific and is worth a look in its own right. Without even trying we saw four species of gull, great and Arctic skuas, a huge number of Arctic terns and grey seals in good numbers.

The skuas in particular were very active. Watching them pirate the terns fish-catch never gets old. The aerobatics are extraordinary.