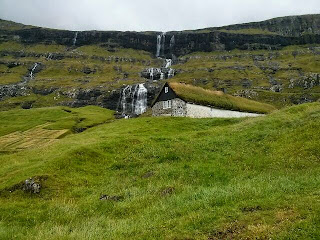 It's rained more or less all day today. No complaints though, this is only the second full day of rain on the entire trip. We dodged a few showers here and there in Iceland, but on balance we wouldn't have dared to hope for as much in the way of the dry and pleasant weather that we've actually encountered given the destinations.

We've spent much of the day pottering about on Eysturoy and both managed to get out for a run around what would have been a very pleasant bay but for the miserable sight of a salmon farm. These are prolific here, as is the case in many a Scottish loch. As I was running I couldn't get past the thoughts that the creatures' lives are woefully short and highly manipulated as they're constantly overfed and 'treated' in their overcrowded pens; meanwhile, the by-products of eutrophicating waste and associated pesticides / fungicides readily bespoil the surrounding marine environment and start their insidious journey into the food chain.

Never mind though, after a lunch of intensively-farmed Arctic char labelled as best organic Faeroese salmon, we headed back to Streymoy where we stumbled upon a pleasant hamlet at the coordinates shown called Saksun, which nestles in a picture-postcard setting (appropriately postcardly pictured) and gives access to some grand walks.

Had it not been for the rain we'd have had a much longer poke about, it's probably the best spot we've so far found on the Islands and would be a good base for a couple of days - for all the stuff we're into anyway.