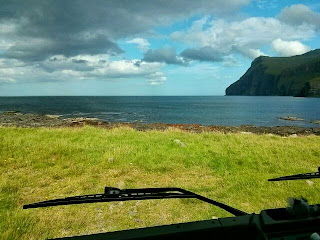 It was a shock to the system being decanted from the ship at 3.00am this morning. It was still fully dark and we had absolutely no idea of where to go. We were not alone though, somewhere in the region of 60 motorhomes / overlanding vehicles left the port and no one, it seemed, had much of a plan. Think Benny Hill music and dozens of  motorhomes crossing roads this way and that, with lots of going-round-in-circles and multiple seventeen-point turns.

We decided to 'melt' into the urban surroundings of Tórshavn and quickly found a suitable retail park to be swallowed by. It was difficult to sleep after the disruption and disorientation but we managed a couple of hours before getting up and driving off into the countryside prior to the surrounding businesses opening.

First impression of the Faeroes is positive, the landscapes are big and dramatic with some huge cliffs and an ever-present sea. Apparently, you can never be more than 5K from the sea at any time; quite impressive as the total land mass is much, much greater than I'd ever realised at some 1399 Km².

Because of a couple of very expensive sea-tunnel tolls we are effectively restricted to the islands of Streymoy and Eysturoy; it's plenty to go at, though, for the three days we have here. The bird and plant life is far more akin to the uplands of the UK so for the first time in nearly a month things feel a little more familiar. The same is true of the roads, though some here are very narrow and precipitous, they are all metalled. The trunk roads are wide, fast, heavily trafficked, and - for the first time in ages - we've encountered the odd impatient queue behind us as we do our best to maintain a reasonable and safe speed.

An eye-catching cultural feature is grass-roofed houses, which sit really well in the landscape and seem very popular. Birds are abundant and we've spent a very lazy afternoon on the coast at the location shown - and 'cab-cam' pictured - (where we hope to overnight) casually watching the sea and shorebirds amidst bouts of catch-up-on-sleep-dozing. The only 'new' birds here that we didn't see in Iceland have been rock doves - the first members of the pigeon family (usually ubiquitous throughout Europe) we've seen since leaving Denmark.