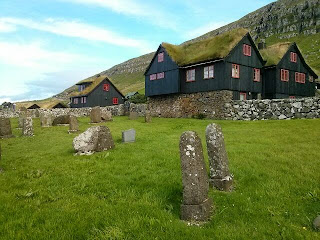 We had another potter about this morning and slowly made our way down to the location shown / pictured, which is a very pretty and immaculately maintained little community called Kirkjubøur. It's got a nice car park overlooking the sea and we're essentially just gazing out, whiling away time until the Norröna arrives this evening to ship us out.

A couple of Belgian motorhomers had spent the night here, which was probably a bit rude. The car park is between some of the nice houses and the sea and overnighting would definitely be intrusive for this community. Camping off formal campsites is highly discouraged here so it seems only fair that if you're going to do it then a bit of discretion and respect should be the minimum requirement. In fairness, most Norröna-decanted motorhomes do seem to be making an effort to stay under the radar.

Speaking of other motorhomers, everywhere we go, we keep seeing the same foreign vehicles mooching about with bored looking occupants. I guess if you aren't much into wildlife or landscapes then having something of an enforced stay here waiting to be able to ship out might resemble purgatory. We've seen one old Hymer parked up in exactly the same spot in open country with curtains drawn since we first arrived: very odd.

Without wanting to seem disrespectful, you do largely have to make your own fun here, especially when it's raining; much like the rest of Denmark, really. In that regard, many Faeroese people seem quite sporty, we've seen lots of runners, lots of younger people sculling boats, a few decent sized soccer pitches, a giant football stadium, a field & track athletics stadium, and a couple of swimming pools.