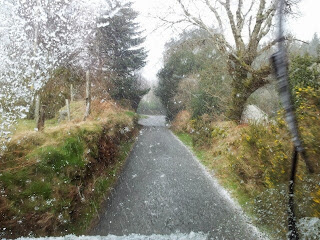 The ferry crossing was delayed due to the wind (storm force 10) but at least we got underway: we were told the ferries after ours were cancelled. The crossing wasn't actually that bad because, though the wind was strong, it was at least head on. It would have been a different tale entirely had the wind been anything other than a westerly.

A drudge of a drive out of Dublin soon saw us into the Wicklow Mountains where I headed for 'The Old Military Road', a very narrow strip of tarmac that winds its way, entirely unsurprisingly, through the Wicklow Mountain landscape. To be honest 'mountain' is a bit optimistic, its more like rolling upland, but pretty nonetheless with some heathland and oak woodland breaking up the moorland.

The weather continues to hammer us (pic), we've encountered gales, hail, sleet, and snow as well as a few sunny spells. Even when it's sunny though it's still bitingly cold outside, the wind is unfeasibly strong and freezing - it literally takes your breath.

We've hunkered for the night at the coordinates shown in the presence of some genuinely veteran downy birch trees and plan a couple of hours pootling around the honeypot of Glendalough tomorrow.

The truck's done everything asked of it so far, we've had to bash through some pretty sturdy overhanging vegetation already and we're currently enjoying an early evening tot in 22°C comfort whilst being literally rocked with a freezing, sleet strewn gale: and rocking the suspension of an ex MoD truck is not something that is easily done.