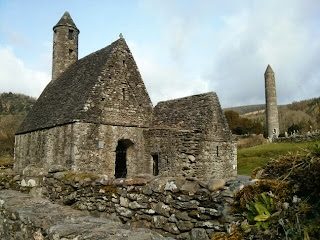 It's been a hectic day. Last night's camp was a good one and the storm force winds had subsided a bit by morning. Of note, we were able to watch the (stormy) world go by until well after 8.00pm last night thanks to our westerly position. Slightly disorientating, but a welcome light-till-late harbinger of spring.

First up this morning was a steady pootle round the ancient ecclesiastical site at Glendalough. The old places of worship and associated buildings are very nicely maintained and bely their 1000+ year old heritage (pic). It's a very definite honeypot that even in the early morning was thronged with tourist, including a disproportionate number of Germans and Italians. Odd.

The afternoon brought a wistful time for Emma. We visited her maternal grandma's birthplace in Enniscorthy and then dropped - utterly unannounced (after a 26 year absence) - on her Great Aunt and Uncle at their farm in Crossabeg where tea, biscuits, and polite raconteurianism flowed freely for an hour or so. Nothing, according to Emma, had changed even slightly.

Following our enforced hospitality experience, we made our way to Wexford Wildfowl Reserve, just because we saw some roadsigns pointing towards it.

And what a place it is. The warden, in spite of being close to closing up for the day, was most accommodating. He not only allowed us to overnight, but unlocked a hide next to the spot he'd said we could use to kip (coordinates), so we could enjoy the late evening and early morning bird activity.

Our 'private' hide produced highlights of waiting-to-migrate white-fronted geese (a first for me) Brent and barnacle geese, huge numbers of black-tailed godwits, as well as a just-migrated swallow (I personally missed it). Solitary and unexpected given the recent winds, but a swallow nonetheless. However it had managed to arrive given the strength of the recent westerlies, goodness only knows.

In other random news, we both managed a run today (just before dark) and diesel here is only €1.30 a litre.