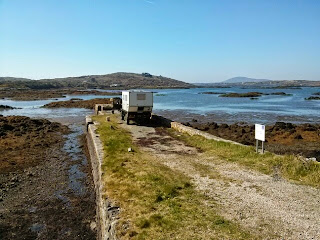 The first part of today was un-inspirational as it involved getting into, through, and out of Galway. Once we were half an hour north west of the city though, things improved dramatically, specifically in the form of The Connemara. This is a vast area of wilderness characterised by rugged hills, incredibly lush peat bog, exposed marble outcrops, and countless peaty pools and rivers. Add to the mix miles of coastline with abundant smugglers' cove type inlets and the result is an area of incredible natural beauty.

It is very sparsely populated and feels very traditional. There is, for example, much evidence of 'peat winning' (on a domestic rather than industrial scale), all the signage is in Gaelic - without English translation, hurling pitches are common, and there is no evidence of creeping commercialism: no big-name fuel stations here - just the very occasional pump or two that appear almost incidental to a general store. It's one of the few places in the world I've so far seen that absolutely doesn't boast a KFC.

It's certainly the most rural, desolate, and outrageously pretty part of Ireland we've so far encountered. The Ring of Kerry it most certainly ain't.