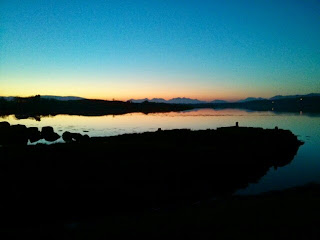 We made the most of sun-up over the  Connemara and then strung out a steady breakfast before we were forced to admit time was running short and essentially began the long trog home.

It's been, then, a day of covering ground. We tried to avoid motorways and stick to smaller roads where possible in order to try to take in a bit more of the essence of the place and this proved to be worthwhile. A couple of sat-nav related issues saw us down a couple of crazy country lanes, including one where a farmer had rigged up a hose to fill an animal trough and had suspended it across the lane using handy foliage at a height of about 3 metres: the truck, of course, is just under 3.5. I had to push the hose up to roof level whilst inching forward and then let the roof bash-bars do their thing. Emma helped by shouting quite a lot. Fortunately hose and vehicle survived unscathed.

We've made it to the coordinates shown which puts us within striking distance of Belfast for our return ferry tomorrow. We're hunkered near a small lake which is currently proving very popular with locals. They're  turning up in droves in the late evening sunshine and engaging in everything from power walking, through dog training, to general bumbling. There's even a bloke out of his tree on booze staggering about and talking very loudly to the resident mallards; or anyone else that will listen...

I'll post more tomorrow on the subject of popular stereotypes, driving conventions, and general culturally related bits and bobs if I have time before the ferry sails.

In other news, I saw my first swallow today, exactly a week after Emma saw hers - unless it's the only one to make it here and it's just moved on a bit.