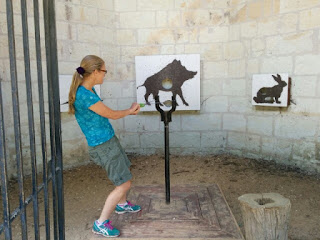 It was a day of covering ground today. After the diversion south to try to find birds of prey we had to gain some ground so basically picked up an N road and trudged north.

It was petty unremarkable with just the occasional biblical downpour and roadworks-induced queue to break the monotony. After mid afternoon the weather improved and we'd done a couple of hundred miles or so, so went into finding-an-overnighting-spot mode.

Within minutes of arriving at an area that looked likely on the map we had a pootle down a forest track and came across a clearing (coordinates) that contains an odd little assortment of buildings. There's a log cabin, some quite old interpretational trail boards and what looks like an old folly. Our French doesn't run to much but it looks like some kind of ancient foresters' site that's been discovered and turned into an attraction: that absolutely no one in France knows about or ever visits.

In the old folly there's even a 'shoot the forest animal' game and a catapult helpfully supplied to provide an opportunity for two slightly perplexed but thoroughly entertained English tourists to do just that.

You find some weird things pootling about in forests in a truck...