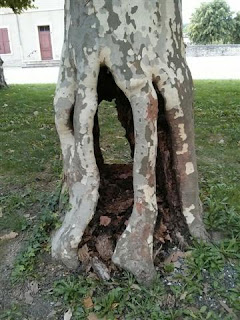 Last night's camp was another top one with only the occasional tawny owl for company. A run through the forest before breakfast started the day well. There were lots of fairly unusual tree species about and even fairly common ones like the London plane pictured tried their best to do weird things.

Once going we made some decent ground to make the Loir valley by lunchtime. We spent a good chunk of time loafing by the river and looking out across its sandbars and islands for any good birdlife. There was nothing much about bird-wise (but we did see a red squirrel) and pretty much after we decided to move off the rains came. Since then it's been pretty miserable weather wise with horizon-to-horizon grey skies and persistent rain.

We didn't really have an end point in mind for today so headed half-heartedly for a couple of Aires. The first wasn't up to much but the second (coordinates) is nice and quiet. It has free water supplies, disposal facilities and access to a decent sized lake that we just might run around in the morning - we're the only vehicle here too.

The popularity of Aires is a tough one to figure, some of these things are noisy and pretty skanky but end up with vans packed in as tight as sardines whilst others, like this one have loads going for them but are often deserted.