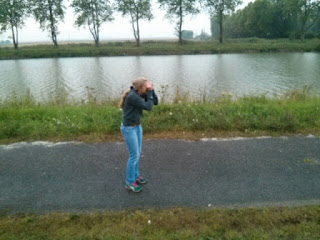 The camp last night was fantastic, we didn't hear one single human-made noise all night, nor did we see any people the whole time we were there.

It started to rain during the early hours and that pretty much set the scene for most of today. It's been grim to say the least with leaden skies and constant rain until late afternoon.

That didn't stop some really good wildlife sightings though, with the highlights being good numbers of hen harriers and corn buntings as we made our way over a huge plateau of arable upland. Emma didn't have her binoculars with her when trying to identify one particular small flitting bird but the improvised rolled up hands came up trumps in working out it was a wheatear. Who needs a spotting scope?

Only a typically French detour in the city of Troyes caused a blip in the drive today. French detours basically comprise an unannounced barrier across the mouth of a road simply denying access and a metaphorical Gallic shrug as to how to find an alternative route. Fair to say we had a pretty stressful time of it with an intuitive stab at navigating a large French conurbation with some very low bridges, tight streets, and more than a few 3.5 tonne limits to contend with.

We're at the coordinates shown now and once again listening to abject silence,  punctuated only with the occasional owl call and one or two ominous noises coming from the nearby undergrowth: we suspect small rodents of some description... which would account for the owls.

We both managed a run from here earlier and I was lucky enough to catch a glimpse of a wryneck flitting across one of the forest rides. Emma, meanwhile, had a close encounter with a deer of unknown species (most probably muntjac) - if only she'd have had her rolled up hands with her...