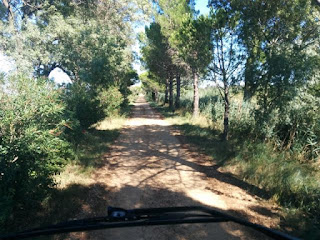 We spent the morning bumbling slowly south on D roads through some achingly pretty villages. It takes ages to cover ground this way but it's so much more rewarding than blasting along anonymous national (N) routes.

Once again the French pride-in-place is remarkable. So much effort is put into making houses and public places immaculate. It's a joy to be amongst it.

We had a pretty good sighting of four storks just after lunch and had an encounter with an army of lizards at afternoon tea break. We stopped by a walled complex of public buildings and the south facing wall, which was about 20 feet high and slightly sloped, was clearly something of a lizard Mecca. There were so many, scurrying in all directions, that it was quite dizzying to watch.

Finding a camp this evening proved hard. By chance, come camp-search time, we ended up bang in the middle of the Beaujolais grape growing region where the normally abundant public places and spare scraps of land are utterly non existent. Every bit of land is clearly privately owned and devoted to growing the much coveted grape. Small farmsteads preside over the entire area and every single apparently quiet road we tried turned out to be some or other farmstead's drive. Roads quickly become no more than tracks round here (pic) and it took a determined effort to finally find some high ground well into the conifer line where grapes thankfully won't grow (coordinates) and more normal (unmolested tranquillity) service was resumed.