After the house-buying trauma scuppered our original trip plans for 2015 we've returned to some some kind of normality and are now getting ready for a few weeks of travel.

Thanks to some very poor advice from the staff at DFDS Seaways at Immingham it looks like we've lost our place on the freight ship that would have seen us arriving at Brevik (Norway) for an attempt at the easternmost point of Norway - Vardo.

As a result the past few days have seen me frantically trying to sling together an alternative route to Finland.

It's just possible - given the time we have - that we may be able to still reach the Russia / Finland / Norway border and take in the Åland Islands en route. I've discovered that Finnlines ferries are exceptionally cheap compared to anything in / out of the UK so we'll be making the most of them.


The stars on map show the ports we'll be using, plus the Russia / Finland / Norway border. In truth, I suspect the border will be a few hundred miles too far - especially if we do our usual and take back roads and bumble at our usual pace - so we'll probably end up essentially doing a giant anti-clockwise loop up through eastern Finland and back down through Sweden.

Malmo will be the start and end point of the loop. 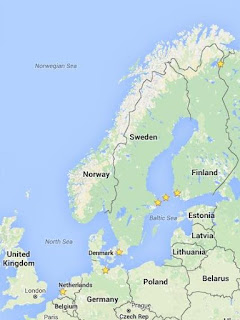