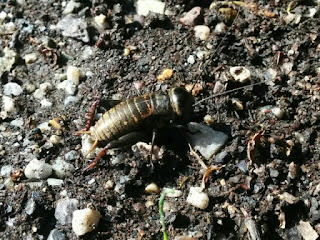 It should have taken three hours maximum today to drive to the port at Caen but two separate road closures saw us traversing tiny country lanes for much of the day. The sat nav was also particularly grumpy so the day turned out to involve quite a long and testing drive.

At least we saw some pleasant countryside rather than tedious N roads. We also both managed a run and the weather's been mainly fine so all told a decent final day.

Only two weeks and three days ago we had no idea we'd be coming to France in the truck but in spite of the lack of planning and only a few rough notions of what we'd like to achieve it's been a good trip. Highlights have been everything that we did on and around Mont Ventoux and in and around the Camargue. The Tarn Gorge was a bit of a disappointment but undoubtedly being there out of season would bring a very different experience.

Some very rambling franco-generalisations, in no particular order:

The small communities of rural France continue to be lovely places to be. The civic pride is outstanding and the feel-good factor of being briefly allowed to share  such pride-in-place is brilliant. This is an enviable culture.

In the past decade there's been a sea change in how easy it is to buy fuel and provisions. Gone are the days of absolutely everything being shut on a weekend and the impossibility of buying fuel at automated pumps with foreign debit or credit cards. Indeed, the French now absolutely ram supermarkets on Sundays, shopping on the Sabbath has replaced the gentle clank of boules. Fuel is now easy to buy using GB bank cards 24/7, or 24/24 as the French prefer to boast.

French drivers are pretty passive, there isn't much aggression. They are very self policing with speed limits, signage and things like crossing unbroken white lines. They do, though, seem to consistently initially fail to react and then subsequently over react to every single hazard they face. It's as if no one can see more than 50 metres up the road. Odd. They are, in the main, reluctant overtakers. Unless the road is straight and clear for 30 miles ahead they will sit behind, clearly frustrated, for hours. We did much for international relations by pulling over to let people by as much as we could.

When it's hot, its right hot and it rains a lot.

It remains one of the easiest places we've been to park and overnight in a motorhome. Campsites, Aires, and some absolutely awesome rough camps abound. We have noticed a bit more resentment from the odd local but I can't fault them for tiring of motorcaravanners, they're blinking everywhere. If rough camping, by far the best strategy, as always, is to get out of sight.

Wildlife is super. There are loads of species that don't quite make it over the channel and the butterfly / dragonfly activity at this time of year is awesome. There are some truly bonkers things too (pic) This chap was about 70mm long: excluding pointy bits! Flora is similarly exotic, in a western European kind of way.

There are more 3.5 tonne limits on French roads than anywhere else we've ever been. I don't remember it being this way a few years ago, maybe there's a push to keep the tight and twisty urban centres free of jams caused by stuck lorries.

Speaking of tight spots, there are lots and they crop up in both urban and rural areas, low bridges abound too.

More generally, it turns out pot noodles are a really good indicator of altitude. Above 1500m the pots start to expand and by about 2000 they are positively fit to burst. We'll try to report back on another trip what their limit is.