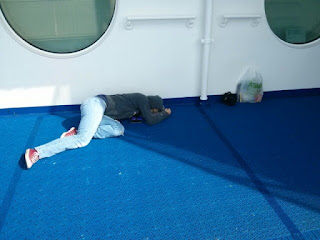 The Harwich - Hook of Holland crossing was really serene - not one bump the whole way over. The ship itself wasn't so cracking though: it felt a bit overcrowded and there wasn't much in the way of communal seating. Emma improvised pretty effectively notwithstanding. She swears she didn't sleep but was definitely motionless and drooling for a good hour.

Passengers were truly multi-cultural - lots of languages and lots of creeds aboard, it would be fascinating to know where all the different people were coming from - and going to.

We only landed a couple of hours ago but initial impressions of the Netherlands are positive. It's clean and tidy so far and the biking-scene and biking-infrastructure are just awesome.

Just by chance, we passed a truck garage that must have had 20 or so Unimogs on the forecourt - interesting!

Found a hidey-hole to kip (co-ordinates) and will have a wander around the woodland we're adjacent to before heading off tomorrow morning.