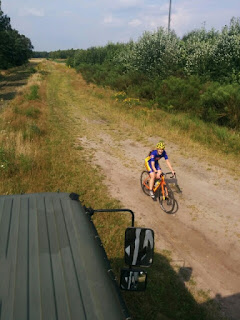 Met a pleasant Dutch local just before we left last night's overnighting spot who was delighted we'd shown an interest in his local patch. We shared tales of green woodpecker and roe deer before heading off in the rough direction of northern Germany.

The Netherlands - based on our very brief encounter - is very pleasant indeed. I raced here at a couple of rural venues about 20 years ago and was incredibly impressed with how clean and organised everything was - particularly when it came to push-bikes. If anything, it's even better now. I know there's some good habitat and birdlife here so it's probably worth a closer inspection some time future. Shame we're rushing through.
Lunchtime saw us into Germany and mid-afternoon saw us about half way to Travemünde (the port we need to reach next) so we decided on an early finish and rooted out a spot to call home for tonight at the co-ordinates shown.

It's a top place in a natural park and it's lent itself well to a lazy couple of hours wildlife watching out of the top of the truck. Brown hare and roe deer are common and birdlife is plentiful. Best sighting has been a resident family of red-backed shrikes. I even saw one of the adults do the archetypal butcher-bird thing and skewer an insect on a barbed-wire fence.

Emma capitalised on the miles of sandy forest tracks and had an hour out on her new gravel bike. It's an awesome bit of kit and she came back with a grin a mile wide.