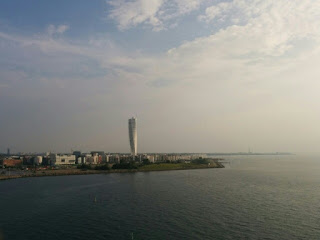 In spite of the extortionate Öresund toll charges, Emma had her sights firmly set on one of the Copenhagen parkruns and so, notwithstanding great potential for an epic fail, we left the watchfull eye of Malmö's helix tower (pic) and snuck expensively into the south east of Copenhagen, flirted with the city's low emission zone boundaries, and found the correct park for the selected (Amager Strandpark) run.

Body blow though! None of the many runners and wetsuit-clad swimmers who were engaged in the loads of sporty stuff that was already going on there had ever heard of the parkrun concept.

We frantically Googled the parkrun website again and confirmed we were theoretically roughly in the right place and eventually, after much questioning of random strangers (all of whom had fantastic English), at about twenty to nine, chanced upon one older guy out running who was familiar with the event: he assured us a parkrun did indeed take place, BUT, he had a suspicion the venue had changed.

We were starting to feel pretty anxious when we had a lucky break and almost casually bumped into the actual run organiser. Phew! He explained that though many people run and otherwise train in the park, parkruns in Denmark just don't have the traction they do in the UK. He also assured us that in spite of the late hour, other people would turn up to run.

And they did. It was all very laid back and low key without much heed for the normal 9.00am-prompt start time but eventually about 60 people mustered and it was game on.

The course itself was great, situated on a pretty sea-facing peninsula with the Öresund bridge in the background in one direction and the cityscape of Copenhagen in the other.

Of course, being Denmark, it rained; but on this occasion anyway its cooling effect was pretty welcome.
We both enjoyed the event but after my own full-distance triathlon effort last Sunday, I at least will now be hobbling about like a lame donkey for the next few days.

The whole thing was brilliant spontaneity on Emma's part and as we left the venue we casually recounted the past 24 hours. We'd woken up in Germany, sailed to Sweden, kipped there, driven to Denmark, done a parkrun and had seen and experienced the truly-awesome Öresund bridge from every possible angle.