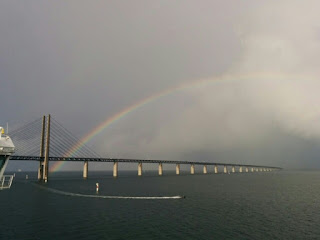 We arrived at Malmö just after 7.00pm having sailed under the awesomely spectacular Öresund bridge (pic).

The toll charge over the bridge is eye-wateringly expensive but when Emma gets a parkrun-related idea...

On the strength of a possible mini-assault into Denmark we've stayed close to Malmö docks. In spite of city sprawling away behind the genuinely impressive iconic helix tower we've found a bit of industrial wasteland (co-ordinates) that overlooks a small and unloved lagoon. This hosts loads of gull species and a few terns and wildfowl too. They seem to care little for the invisible-from-here cityscape and I have to say I'm with them.

In truck news, almost unbelievably and very disappointingly one of the infernal diesel fittings has yet again started leaking fuel. The one that's failed is the one we replaced on our return from Iceland less than two years ago. At least this means we keep a 100% record for every extended trip we've ever done throwing up this irritation.