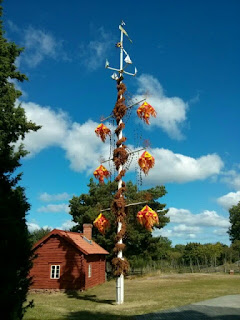 It rained pretty heavily overnight and for the first part of the morning so instead of enjoying a planned walk we caught up on some drudge including visiting a supermarket, getting fuel and sorting a couple of little truck jobs.

Approaching lunch it faired up, though and whilst waiting to catch the ferry (co-ordinates) we had two more white-tailed eagle sightings - one of which was being mobbed by two common gulls. This really brought its size home. The gulls looked ridiculously tiny alongside it.

The Åland Islands have been a revelation. They are beautiful and the archipelago is genuinely vast. Nothing jars the eye. Roads are smooth and well maintained with hardly any traffic. The cycleways are just as well maintained and the network is massive. There are hundreds of cycle tourists here and it's not difficult to see why. Even the gravel roads - and there are hundreds - are nicely maintained (though there is quite a bit of washboard to be had).

On the main islands at least, the place is well set up for tourism and tourists are apparent in huge numbers. They're mainly Finns and Swedes but Germans are not far behind. After that there's just the odd visitor from further afield including Belgium, Switzerland, the Netherlands, Italy and Norway. (I'm sure there'll be more but those were the number plates we saw.)

There are loads of quiet little coves, plenty of beaches and dozens of cultural attractions too. I was personally most fascinated by the comparatively recent Russian occupation era.

'Summer Poles' feature heavily at the moment (pic) - one of those strange symbols of ritual, faith and superstition that are present in just about every human culture the world over, and indeed have been throughout time. This particular brand of mumbo-jumbo is, at least, civilised and benign...

The custom / muscle car scene was not expected. Whilst in the supermarket this morning I noticed at least 25 different motoring mags and the vast majority were heavily American street-rod based / resto-mod based.

Well, that's about it for the thoroughly-recommended islands, next stop Finland...