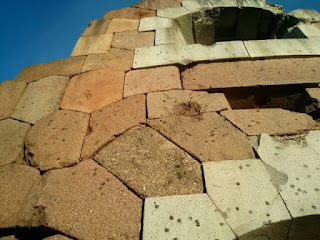 Today, we've mainly been hard-core tourists. We started with the only 'true' castle on the Islands at Kastelholms. The castle itself was nicely presented and there were lots of ancillary attractions depicting Åland life-of-old. All very touristy but pleasant enough.

Second we 'did' Bomarsund, the site and ruins of an incredibly elaborate Russian-made fort that was 45 years in the making and then only 25% completed. The sheer scale is hard to take in. The fort complex contained an entire micro-city and even had its own prison.

Well before it was completed it was overthrown and destroyed by an English / French / Turkish alliance during the mid 1800s. The granite facades still bear the crushing scars of cannonballs and munition fire (pic). There are recently erected monuments to the British and French that died here.

After Bomarsund and it's attendant local attractions (such as a Russian telegraph station for example) we were all touristed out.

So we chilled. We found a nice little spot to park with a sea view and lazed. We fitted a bike ride in, but mainly just lazed. We agreed that lazing is good.

The bike ride threw up what looked like the makings of a good overnighting spot so we've now made our way to it (co-ordinates) and are hunkered down.

As an aside, it's been hot in the sun today, I could feel my arms being burned well after 8.00pm.

Natural history highlight of the day was an osprey seen first thing this morning gliding nonchalantly over one of the countless thousands of little sea bays.