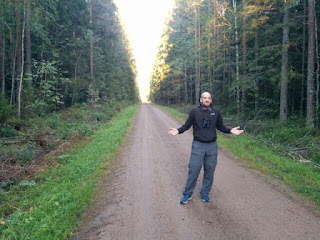 The ferry trip up to Finland from the islands was simply spectacular. Basically, the archipelago that terminates with the Åland Islands runs from south west Finland all the way to the Åland territory and such is the layout of the countless thousands of islands that the ferry is sometimes squeezing through improbable gaps.

The whole trip was just a brilliant experience and, as before, ridiculous value for money. 2 x adults 1x truck, 2 x all-you-can-eat buffets, free Wi-Fi, free electricity hook-up in the hold if required and five of the most scenic cruising hours I've ever known, all for £66.

We arrived in Finland at 7.00pm and have gravel-tracked our way inland to the co-ordinates shown. This is a national park known for its forests, bog and mire habitat. We've already seen two ravens spying knowingly out of the forest at our planned overnighting caper. Tonight we kip, tomorrow we explore.

I was last in Finland about 10 years ago on a push-bike tour and I found it an altogether difficult-to-fathom place. There was nothing big I could really put my finger on - it was just weird in tons of sublime ways. Initial impressions this time round are similar; even the late-evening sunshine is freaky...