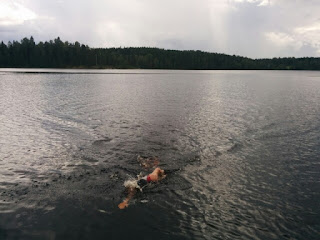 We had a short wander around the national park this morning and re-discovered some of the great-outdoorsie type stuff that I remember from last time I was here.

In public places in Finland, it's common to find provisions like rudimentary camping shelters, fire pits, earth toilets, changing rooms for swimming in lakes etc, all to facilitate an outdoor lifestyle. The structures are invariably of a timber construction and all seem well maintained. Someone must visit frequently and replenish faggots for burning, fresh earth for depositing on, err, deposits; and anything else that needs sorting.

Bottom line is that such infrastructure exists in abundance here and seemingly, none of the facilities are abused or mindlessly trashed. Finland is clearly some considerable way behind the UK when it comes to mindless trashing.

Just after lunch we took in a lake that's set up as one of countless public swimming areas. Naturally, well-kept timber changing rooms and earth toilets were provided, as well as a helpful jetty. After that though, you're on your own. No lifeguards, no fuss: just an unmanaged lake to thrash about in. Because the lakes in this part of Finland are on a peaty substrate, any light that enters is quickly sucked into the abyss. It's like swimming in ink (pic): there's absolutely no visual perception of depth, or indeed of anything. It's genuinely spooky.

A steady potter in a generally northerly direction has seen us bumble to the co-ordinates shown where we intend to kip. The location overlooks a small lake and I've been watching a black-throated diver doing its thing for a little while whilst a pair of slightly unnerving ravens beadily-eyed me. They seem oblivious to the basic rules of bird watching.