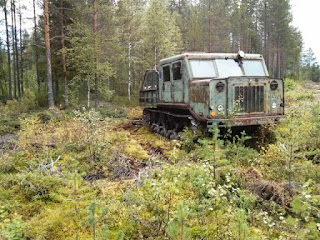 We got to about 1.5km away and then the forest track ran out. We didn't see any exclusion zone signs but thought it best not to push our luck. The border is reportedly patrolled by guards with dogs, by electronic monitors(?) and from the air.

Having not been arrested or shot, we continued the steady bumble further north. The roads were even quieter than yesterday and the scenery more engaging. At lunchtime we stumbled upon a museum and a series of monuments and ordnance (pic) all dedicated to loss of life that occurred in the area during a conflict between 1939 and 1941 when Russian forces invaded and tried to advance on the important Finish city of Oulu. They were thwarted but at some cost.

We spent a while in the area and had a look at a few of the artefacts before heading off into autumn - really!
As we approach the Arctic Circle there's a noticeably different look to the omnipresent birches. Many are already yellow or brown and are shedding leaves. We're also now into reindeer territory. We're seeing them in good numbers and though they're not truly wild animals, they are free to roam anywhere they please, including the roads.

Approaching finding-a-camp time coincided annoyingly with reaching the most heavily populated area we'd seen all day. Not that it's more than a few houses dotted along a gravel road but it isn't much like wilderness. I could have pressed on but was starting to fatigue so we've holed up at the co-ordinates shown which is another typically Finnish outdoorsie space.

This time it's an elaborate fishing platform over a fast-flowing river, a logging shed complete with faggots and an axe, an earth toilet and a communal shelter with barbecue and fire pit, presumably so the catch of the day can go from river to belly as quickly as possible.

The shelter even sports a fire extinguisher and some rudimentary cooking stuff. No damage, no graffiti, nothing abused: just untrammelled communal property.