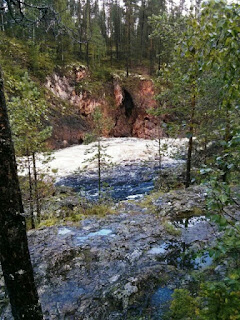 First order of the day was to visit the Kiutaköngäs waterfall (co-ordinates and pic). It's regarded as one of the best in Finland and though it's modest by comparison to many found in neighbouring Scandinavian countries it is pretty cool and is responsible for a very pretty gorge with some very distinctive and colourful geological formations. It's certainly a world apart from the otherwise dominant pine/birch/lake/bog/marsh habitats that cover the vast, vast majority of the country.

The falls are a real tourist draw and we saw number plates betraying Germans, Swedes, Russians and Polish. The visitor centre here is very nicely presented and has a lovely cafe and some good information. The staff were also kind enough to allow us to fill the truck's tank with drinking water from a handy tap at the back of the building.

Regarding water consumption, yesterday, the 80-litres-remaining light had come on signalling it was time to start casually looking for a refill. As a matter of interest, our consumption is petty consistent. A full tank of about 300 litres gives us three weeks of travel. We could easily stretch this if needed but find approximately 100 litres per seven days meets our ordinary needs perfectly adequately.

Back to the area. The waterfall brought out the best in Finnish mosquitoes. All across the country they are ubiquitous and efficient but at the waterfall - probably due to the high number of unwitting human donors - they were brutal.

Emma is brilliant at dealing with them. It's a pattern that repeats entirely predictably. Stage one is a dismissive waft of an arm. Stage two is to appeal to them in full English sentences to let her be. Stage three involves an escalation consisting of the use of some mild expletives and a final vociferous acceptance of the fact that the creature, seemingly born out of wedlock, currently has the upper hand; by this stage the confrontation is becoming personal. Stage four is to withdraw to a brewing silence and to purposefully rapidly move, or, if already moving, to change speed or direction of travel - this stage is often accompanied by a holding of breath and a puffing-out of cheeks. Stage five is the final tramp-on-a-bench style rant complete with wildly flailing arms, gutteral utterances,  grizzly language, and a complete lack of social expectation or self awareness.

Fair to say I get bitten far more than she does.