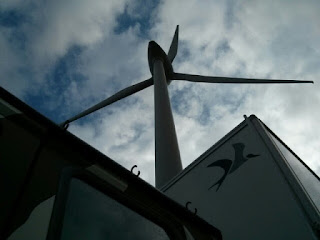 Heading out of Germany and into the Netherlands the weather was foul and the autoroute dull so I took a random decision to head north, to the Waddenzee area; the Dutch continuation of the German coastline we followed yesterday.

What a treat awaited us. I'd heard of Lauwersmeer national park before (from proper birders) but as soon as we chanced upon it (co-ordinates) I could see for myself what all the fuss is about. Thousands of geese dominated the scene with greylags and barnacle being the most common. Also plentiful were spoonbills, ruddy shelducks and Egyptian geese - as well as stacks of other fairly common species. In spite of the rain it was a sight to behold. A cursory cruise around the area in the truck also gave up greenshank and water rail.

We're already talking of ways to spend a good chunk of time here sometime future, either when travelling through, or - maybe preferably - by dedicating a trip here during migration time.

Just an awesome place for birding, I imagine a couple of days with the optics and a push bike would throw up some real treats.

In truck news, the new wind generator is working well (pic) but has given us a few problems under low bridges.