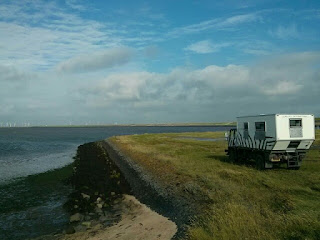 After leaving the nature reserve we pottered through a mixture of rural and urban areas to tonight's overnighting spot at the co-ordinates shown. We actually only stopped here with a view to afternoon tea but quite liked it so decided to call it a day.

The hyperlink to the co-ordinates shows what a peculiar place it is - near the autoroute and part of the truly amazing Afsluitdijk causeway. Being close to the autoroute, it shouldn't be nice: but it is (pic).

There's plenty of birdlife and also much sitting-on-the-dock-of-the-bay style entertainment in the form of a constant back-and-forth flow of boats that are being allowed through the autoroute swing bridge on an as-and-when required basis. Yes, they really do close the motorway to allow boats through.

We chanced upon the area quite by accident (if you were driving on the autoroute you'd be past it and have nowhere to turn by the time you'd seen it) but it's clearly well known. Six motorhomes in total are now parked up on the bit of land we're using but they've at least all kept a respectful distance from one another.

Luckily, we can't be joined too closely as the truck's allowed us to get over a particularly rutted and wet section that would see a normal van stuck.

Totally impressed by what we've seen of the Netherlands so far - more details to follow...