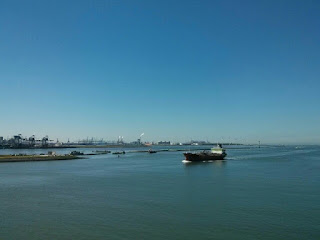 As per the co-ordinates and pic, we're now safely at the Hook of Holland and about to board the ferry back to the UK.

The Netherlands has been a real surprise, in fact we're both incredibly impressed. As briefly mentioned much earlier in this blog I was last here just about exactly 20 years ago and only for five days. The whole focus of that particular trip was three days of bike racing with two road races and one time trial. It was full on and although I spent a bit of time enjoying the cycleways I didn't really look at the country.

It's a shame because I feel sure I'd have been back before now.

It's very, very clean and tidy compared to the UK and there's a real sense of civic pride, good order and high standards. A thing of particular note are wide-mouthed angled litter bins that occasionally appear right at the sides of carriageways so motorists can slam-dunk litter into them as they drive by. It's no exaggeration to say we saw no litter anywhere. It's so clean it's slightly surreal.

The cycleways are, as is well known anyway, absolutely fantastic. They're extensive and brilliantly maintained. It's clearly simply part of the mindset here that cycling is a legitimate form of transportation and that cyclists are actual, real people.

Everyone - of all ages and creeds - uses bikes to go anywhere and everywhere. Motorists do not carve them up and then shout abuse: nor are cyclists regarded as road-tax dodging pariahs. It's all very un-British.

Canal's are everywhere too, and again appear brilliantly maintained. Boating is obviously massive here and even just whizzing through we've seen all manner of ancient and modern craft. Marinas are everywhere and packed. I could imagine a very agreeable lifestyle pottering the Dutch waterway system.

Best of all has been the birdlife. The whole country just seems to teem. Even just driving down the roads it's easy to spot fields full of gulls and geese. I'm sure, given more time, we could have spotted all sorts of good stuff. Probably helping is the abundance of what is obviously only semi-improved / unimproved farmland. Wet pasture and marsh is abundant and massive monocultures largely absent. I'm absolutely going to do a bit of research into the Dutch nature conservation scene and look forward to coming back for a proper look around.

In short, in so many ways, the Dutch have it sussed. We both feel very comfortable here.