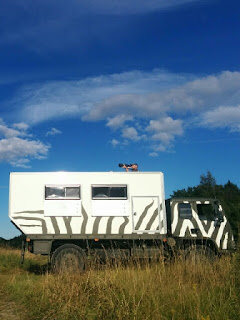 Another reasonably interesting trunk-road-based drive saw us across the sprawl of Stockholm and arriving at our ferry port, Kappelskär, by early afternoon.

From the motorway, we also saw a massive banner in a farmer's field that roughly translated to: 'Thank you England for shaking the establishment'. It seems that, in this corner of Sweden anyway, there's a UK-like groundswell of discontent with the whole relationship-with-the-EU thing.

Other interesting (to me only, admittedly) motorway curios have included passing Husqvarna and it's associated museum and also passing the legendary Mantorp Park dragstrip. Both evoked strong memories of my motocross and enduro racing, and the sheer madness of top fuel floppers and rails. (If you haven't seen top-fuellers, watch them live at least once; you won't believe your senses - any of them - 0-100mph in under 1 second takes some processing.)

On arriving at Kappelskär we had the whole afternoon free so had a spin out on the bikes together. We stuck to gravel roads and whilst bumbling aimlessly rooted out a top camp (co-ordinates). Whilst bumbling on the bikes, we also chanced upon a seemingly recently abandoned building that had a smack of ex-military about it. There were also a couple of abandoned cars there. It was lost in some woodland down a secluded and half-heartedly barriered track. We hadn't expected to find an obviously private building so upon realising our transgression we turned and pedalled away. As we did, we passed a couple of disheveled middle-eastern / north African chaps pedalling old clunker bikes towards it. They looked suspiciously at us looking suspiciously at them. I guess we were all somewhere where we shouldn't have been.

The overnighting spot has been brilliant so far. It's next to a nature reserve and super-quiet. From the top of the truck we've seen whinchat, red-backed shrike and a honey buzzard, as well as the more expected stuff. The area's also rich in grasshoppers and butterflies. In fact, I don't recall ever seeing as many fritillaries as we've seen this evening.

As we started to get ready to kip a splendid mist started to rise as the light began to fade. There's a definite nip in the air when the sun's not shining. The evenings are feeling a bit like October might  at home.

1167 miles now show on the odometer - tomorrow morning we sail for the Åland Islands.