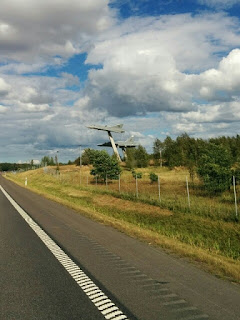 As planned, we spent all morning walking around / generally being amongst the Store Mosse reserve and it was fantastic.

It's a proper wide-open-space and big-skies kind of place and there are some really interesting habitats including raised bog, fen, floating mats of vegetation, open water, marsh, and some scrub and woodland. In some of the bogs are some really cool examples of dwarf pines. Unable to eek out enough nutrients to develop fully, they instead create an almost bonsai-type forest.

Birdlife was good with cranes, tree pipit and crested tit being the most memorable. Many butterfly and dragonflies were apparent too, plus a good number of lizards (not sure of the species).

After leaving the reserve we had to stock up on a few provisions so found a mid-sized town. It was pleasant enough on first glance and even featured a big lake at its heart, on which I saw a pair of black-throated divers (known as loons locally - as they are in Canada). There were some slightly iffy-feeling parts to the place too, though. There was quite a bit of litter, a beggar, a strong police presence and some altogether shifty looking people about.

What we've seen of Sweden so far in terms of civic pride generally is probably worse than when we were last here eight years ago. It just hasn't been as spic-and-span as we previously experienced and is currently some way behind the Netherlands and Germany. Like Germany, there's also the inescapable fact that the social demographic is irrefutably changing. Not suggesting these two observations are in any way correlated though.

Back to things more natural-world, it's great to walk amongst random bits of grassland - even right next to urban roads - and have the ground in front of you seem alive with grasshoppers. It used to be this way in England before agricultural practice effectively annihilated them. Still, if bread is two pence a loaf cheaper: then so what if we wipe out entire taxonomic groups.

The need to cover ground towards our next ferry terminal meant we had to cram in the motorway miles but it's not been too dull. There are some really interesting vehicles here. The Swedish interest in resto-mod, American classics and muscle cars etc is obvious. As well as such 'regular' stuff we also saw loads of off-the-wall type oddities like three amphibious cars, for example. And then there are the trucks. A huge proportion are rigid of maybe thirty feet or so that pull a converter dolly which itself supports a full semi trailer. Proper road trains in effect. Some must be almost 30m in total length.

To add to the entertainment, whilst banging out the miles, we encountered some alien-like modern art installations and some full-sized classic aircraft on giant stands set up like surreal Airfix models along the motorway verges I don't know why the Swedes do such things but I'm glad they do.

By sheer luck, whilst driving on a motorway viaduct over the celebrated Göta canal we also saw an improbably sized boat being navigated heroically. The canal looked more like a river at this particular point with deeply encroaching overhead vegetation but nonetheless, the truly huge ship was being expertly navigated along the pound. It truly filled every dimension: I would have hated to have met it head-on. Overnighting now at the co-ordinates shown. A workmanlike rather than spectacular camp.