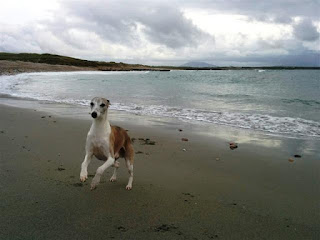 Though it was all a bit of a rush I was determined to pay a last visit to a wildfowl reserve not too far from last night's overnighting spot.

It was well worth it. It was a freshwater reserve called the Inch Levels and it was teeming. As well as the expected stuff we saw about 60 whooper swans and best of all somewhere in the region of 300 black-tailed godwits in full summer plumage, presumably stocking up before their final migratory push north. It was a shame we only had half an hour or so and this is definitely one to spend more time at - if and when we're back in Eire.

From there all that remained was to fuel up and head for Larne. On fuel pricing: we've paid in € just about the same rate as UK prices in GBP - the cheapest we scored was €1.17 per litre (about £1.01).

The trip was unremarkable, the ferry crossing smooth, and a remarkably short time after leaving the Connemara - which seems now like days ago - we're at the coordinates shown for the night: a nice quiet place we've used before.

Tomorrow will see the final push home. In spite of Emma's illness and my crash it's been a super trip. It seems the Irish are almost all genuinely friendly and welcoming, not once (again) did we witness any negativity, impatience or aggression. Certainly in the rural parts we've visited it just seems everyone has more time and is more tolerant than we're nowadays accustomed to at home.

The landscapes and seascapes are awesome, the wildlife good, and it's very easy to find top-notch informal overnighting spots.

The whippet's really enjoyed himself. Because we've both been a little less active than usual he's been able to enjoy his favourite passtime of dozing in the warm cab, interspersed with short sessions of going flat-out crackers around his preferred habitat of sand dunes and beaches.

Finally, the truck - once again - just did everything asked of it without the slightest grumble. We were utterly independent apart from needing to take on diesel (and medical supplies) and it just shrugged off every bit of tricky terrain thrown its way.