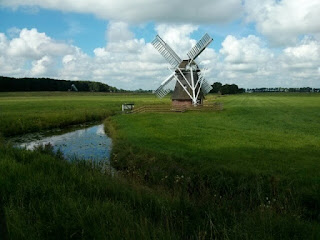 Emma went for a run first thing while I spent a bit more time scoping. I forgot to list spoonbills and great white egret yesterday, both were again around this morning. Best sighting was a raptor persistently harassing small waders. It would split a flock then pursue a separated individual twisting and turning relentlessly. The waders had a neat trick of diving into the water at the last second which splashed the raptor and ended the chase. I'm not entirely sure whether the raptor was a large sparrowhawk or a small goshawk: probably the former.

After leaving the reserve we pottered through rural countryside dotted with neat villages and the ubiquitous waterways. The Dutch are massively into their boating right from small pleasure craft up to huge commercial barges. The number of beautifully kept veteran boats is staggering. Because of the flat aspect, it's common to see boats moving - apparently incongruously across fields - with any random glance out across the countryside. When it comes to watereway/road crossings, waterways have the right of way and all crossings seem attended by a permanent bridge-keeper.

Whilst still enjoying the windmill-dotted countryside we stumbled undramatically into Germany. In the spirit of an easy start, we headed to the coordinates shown and, by 1.00pm, called it a day. I biked, Emma read and we both watched birds out over the marshlands (hen harrier was the best sighting). I also did a few small truck jobs and tests of the electrical mods I've recently made. We seem to be getting much better battery performance and so far all is looking promising.

Quite a few locals stopped for an Anglo/German gesture-led 'chat' and all were friendly and welcoming.

We'll be leaving the Wadden Sea tomorrow morning, a huge shame as it's genuinely awesome.