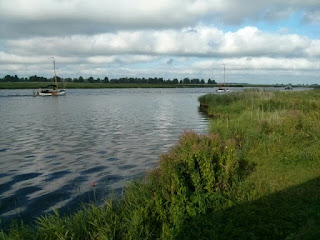 I was rudely awoken by the ship's announcement that we were only an hour away from docking. Emma wasn't so troubled as she'd lain awake all night: a skill she's honed over the years. Any bed but her own creates a night of wide-eyed frustration.

A quick check of the kennel-cam saw that none of the dogs had been as troubled by their change of venue: all had slept well.

And so to the Netherlands. Within seconds of leaving the port (passports checked for the first time in many years crossing a purely euro-border) we were once again impressed with the general street-scenes. Fantastic cycleways with thousands using them, no litter, nothing mindlessly damaged, no graffiti, just bags of civic pride.

The trip north mostly comprised autoroute and a lolling-headed, comatose wife but even from the motorways the birdlife was brilliant. Thousands of geese, wildfowl and waders shared unimproved wet pasture with healthy-looking cattle herds.

As we passed through small towns and villages the impression of the Dutch being sanitised, organised and just plain civilised grew. They are on to something here.

Lunch was spent watching kitesurfers on IJsselmeer from a picnic spot off the ten-million mile long causeway that separates the IJsselmeer from the north sea. One guy was something of an expert and was launching and flying to a height of 10 metres or so for six or seven seconds at a time. Scary.

Now at the coordinates shown at Lauwersmeer in the Wadden Sea UNESCO reserve. This was the spot we chanced upon last year that I'd been determined to return to. It hasn't disappointed. The birdlife is simply amazing. Amongst the thousands of greylags and Canada geese, and not including more common species, I spotted: barnacle goose, dunlin, knot, ruff, golden plover, black-tailed godwit, bar-headed goose, marsh harrier, ruddy shelduck, Egyptian goose, avocet and - a first for me - Caspian tern.

Post intensive birding session we lazed about watching river-traffic and idly admiring the sights and sounds - mainly noisy geese - but including subtleties like grasshopper warbler.

It's an awesome reserve in a much-underrated country. We're on to them, this is a top place to be.